Watch the VIDEO proceedings of the 121st Maramon Convention from here 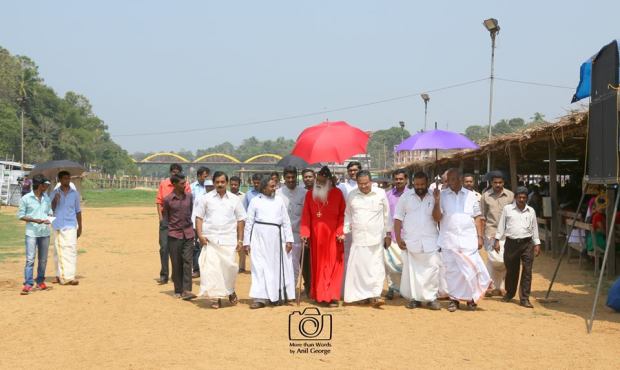 An undated early photo of the Maramon Convention. (www.marthoma.in)

The first Maramon Convention was held from 9th March (Friday) to 18th March (Sunday) in 1895 at the Parapuzha Manalpuram of the River Pamba (the location was situated between the famous Aranmula Temple and the Maramon Church) about one kilometer away from the present venue. It was a ten day event.

The pandal (tent) could accommodate about 7000 people. Mr. David and Mr. Wordsworth, both missionaries from Ceylon (today known as Sri Lanka) were the main speakers of the convention. Mar Thoma Metropolitan Titus I gave the leadership for the convention meetings. Deacon Kakkasseri Varghese of Kunnamkulam (7 July 1867 – 4 June 1897) translated the messages from English to Malayalam for the audiences to understand.

Lent starts on Sunday 10th February 2016 and ends with Easter Sunday on 27th March 2016. We are expected to set apart a time for serious reflection, self-examination and renewed commitment with fasting and prayer during the Lent season. Our Church observes 50 days as the Lent period including the 40 days in which our Lord fasted and 10 days commemorating His passion and crucifixion.

Dr. Eli Stanley Jones was born in Baltimore, Maryland, USA on 3rd January 1884. He was a faculty member at Asbury College, Kentucky, USA when he was called to missionary service in India in 1907 under the Board of Missions of the Methodist Episcopal Church.

“For more than half a century Dr E. Stanley Jones proclaimed the Gospel of Christ and applied it to people’s personal, social, national, and international problems. He moved among statesmen and among leaders without portfolios as counselor, friend and worker for peace and goodwill.

In 1946, with the help of friends in USA, he donated the first loud speaker setup to the Maramon Convention. He is also the founder of the Sat Tal Christian Ashram movement, Nainital, Uttarakhand, India. He died on January 25, 1973 in his beloved India.

In the 1920s, India began to develop greater appreciation for its own history and culture and greater pride in its own unique contributions to world civilization. Stanley Jones was one of the very first to realize the possibilities that this change in India’s intellectual and spiritual culture created for Christianity and especially for Western Christian missionaries. But he could not fully understand the astounding scope and depth of the possibilities without experiencing the history and culture of his adopted country for himself. So, what better way to immerse himself in the ethos of India than to visit Indian ashrams?

This is exactly what he did. In 1923, he spent two months at Santiniketan, the ashram of the world-famous poet, Rabindranath Tagore. Three years later in 1926 he visited Gandhi’s ashram at Sabarmati.

It is no exaggeration to say that Jones’ visits to these ashrams changed the course of his life. In fact, in 1930, he established his own ashram as a spiritual retreat for Christians modeled on his experience with Ashrams in India. But this was only the first of hundreds of Christian ashrams that would eventually be established throughout the world. These ashrams are truly the work of the Holy Spirit as they continue to inspire, refresh, and renew thousands of Christians in many nations today.
~ From “Ordinary Man, Extraordinary Mission: The Life and Work of E. Stanley Jones” by Stephen A. Graham 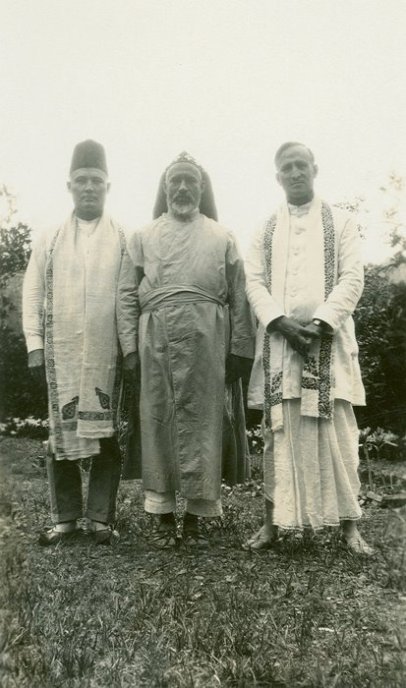 Right from its initial years, many women speakers have made a great impact on the Maramon Convention. Mrs. F.S. Nicholson and Miss. S.C. McKibbin conducted special meetings and Bible classes for women during the convention in 1905. They are remembered for their devoted service to the women of Travancore particularly in the education field. They established the prestigious Nicholson Syrian Girls Higher Secondary School and Training Home in 1910 at Kattode, Tiruvalla, Kerala.

Other eminent speakers included Miss Amy Carmichael, founder of the Dohnavur Mission, Tamil Nadu, Miss Kellaway of Vanitha Mandiram, and Miss Grower to name a few missionaries who encouraged women towards the Lord’s work through Bible classes during the early days of the Convention. 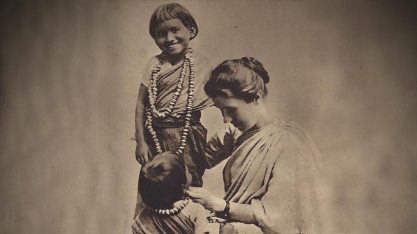 Amy Carmichael with the children of Dohnavur Mission, Tamil Nadu

Ban of Tobacco and Paan at the Maramon Convention

The use of tobacco and paan was a way of life in Kerala during the first half of the 20th Century. It was an essential item at social events such as marriages and other family gatherings. Tobacco and paan was easily available through shops all over Kerala. It was a common sight to have people attend the Maramon Convention meetings with beedi and murukkan in their pockets.

Through his messages, Dr. Stanley Jones urged people to refrain from the use of tobacco products. During one meeting, he asked the convention participants to bury their tobacco (which they were carrying) in the sand on the pandal floor. In another meeting, he collected all the tobacco products from the people and burnt it near the pandal in front of everyone.

It is only after much persuasion that the people stop using it and today it is not permitted at the Maramon Convention pandal.

At present, Maramon Convention messages (full text) are printed and sold on the next day morning from counters for the convention attendees. This enables people to take home the sermons of the previous day and read them again and share the sermons with people who were not able to attend the convention. These printed sermons are also shared in cottage prayer fellowships, parish prayer groups  and for personal prayer and meditation.

However, few people know that this practice started in 1905. There were no microphones and speakers. The convention messages were repeated in relay by three persons – at times four or more – standing in different places of the pandal to make it audible to the thousands of people who attended. This relay process took a long time and was tedious for the audiences. The printing of messages in 1905 became a real blessing for all and continues to be so today. Today, God has blessed the Church members with technology which enables them to watch the Convention live through web streaming and receive updates on emails and websites.

Given below is the report about this, from the Thomas Walker’s biography.

“1905 Wednesday, February 22. I awoke feeling very weary, for the heat was extraordinarily oppressive, and seemed to take all the life out of one. The Syrian brethren made one very good arrangement this year.

Each day’s addresses wore printed by night at their printing press at Tiruwella, eight miles away, and were on sale the next day in a booth near the pandal. Thus
the printed pages supplemented the speaker’s voice, and carried the message far and wide.”

~ Rev. Thomas Walker was one of the main speakers at the Maramon Convention from 1898 to 1912. He was a Church Missionary Society (CMS) missionary from Tirunelveli. He emphasized the importance on studying the Word of God (Bible) and to promote the missionary work of the Mar Thoma Syrian Church.

Though the first convention began in 1895, the sermons were delivered to the tens of thousands of church members who attended in a very unique manner. Until 1936, messages of the main speaker were repeated in relay by designated people standing in between the participants of the convention. It was a time consuming process for the message from the front to pass through thousands of participants to reach the back of the audience. In 1936, a loud speaker and mike (microphone) set was brought to Maramon from USA by the famous missionary Rev. Dr. E. Stanley Jones. It was donated by one of the Christian Churches in USA. He was a well wisher of the Mar Thoma Church and encouraged the missionary zeal of the Church.

The sermon title is, “The Gift of the Holy Spirit: The Birthright of All Christians.” The sermon was preached at a U.S. Ashram in August 1960. (This sermon is included in the 2008 book, Living Upon the Way: Selected Sermons of E. Stanley Jones on Self-Surrender and Conversion.) This audio clip is from www.methodistthinker.com 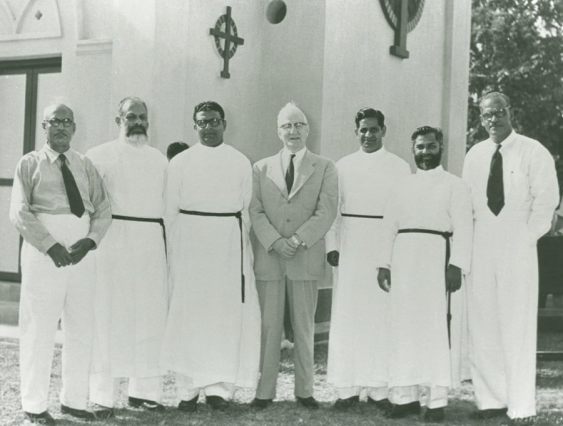 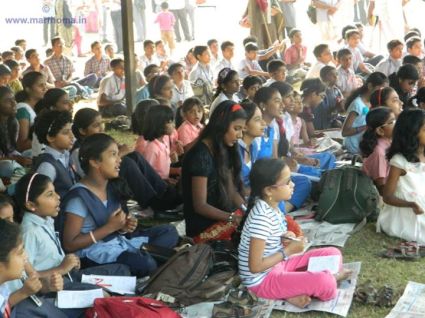 A pdf resource sheet for Parents / Sunday School Teachers to explain to their children facts and events chosen from the history of the Maramon Convention.

After obtaining the B.A., L.T Degrees he became the Headmaster of Keezhillam School. He took the initiative for the establishment of the Ashram High School at Perumbavoor.