On 1st September 2020 – we remember Indian freedom fighter Mr. O. C. Chacko on his 100th (centenary) birth anniversary. Mr. O. C. Chacko was part of the Indian National Army (INA) of Subash Chandhra Bose and member of the Kuriannoor Mar Thoma Church, Pathanamthitta, Kerala. He was born on 1st September 1920 and passed away on 14th April 2014. He is buried at Neelethu Mar Thoma Church, Kuriannoor.

“The legacy of heroes is the memory of a great name and the inheritance of a great example.”

We carry below an English translation of an article Published in Malayala Manorama newspaper on
14th August 2013, a day before Independence Day.

Even after Six Decades, The spirit of Independence has not dwindled

Even after half a century of independence, Mr. O.C. Chacko observes, it has not lost its sheen. Before the day when the tricolor of India rose up bringing down the British flag on August 15, 1947, the eyes that dreamt such a morning still sparkle. The ears that heard the trumpet call of freedom fighters and their war cry are still kept open to hear it again. Only that the feet that had walked in steady gait braving the enslaving British yoke have become slightly unsteady. But he still jumps up from his wheel chair with the same enthusiasm on hearing the names of Netaji and INA – that is O.C.Chacko of Odikandathil Vadakkemannil, Kuriannoor.

He is one of the few surviving soldiers of INA. Every Independence Day is the birth of a new era for Mr. O.C. Chacko. Coincidentally, his birthday falls on a day following the Independence Day. He enters his 94th birthday on 1st September, 2013. In the ecstasy of witnessing one more Independence Day for Mr. Chacko, even in this freedom celebrations the young generation is eagerly awaiting to hear and record his memories. Son of Mr. Chacko of Odikandathil Vadakkemannil, born in September 1920, Mr. Chacko boarded a ship to Singapore in 1941 in search of a job. After a few years he became a soldier of the Indian National Army organized by Netaji Subhash Chandra Bose. He continued to serve as a soldier in the INA till 1945.

He had his first job in Singapore in the war department of the British Government. Thereafter he worked in several organizations in various capacities. Even then, an independent India was his dream. Later, he recorded all the important events in his life. There in his records is the history of organizing the Indian Independence League under the auspices of civilian leaders and Military captain Mohan Singh soon after the surrender of the British Army in Singapore.

Coming from Germany in 1943 in a submarine, Netaji took charge of the independence struggle in Singapore. Soon after, he constituted Azad Hind Government there. He opened camps for training people to be sent to the Burmese war front. He sent a few volunteers including the local people to the Burma border. It was at this time Mr. O.C. Chacko was recruited to the INA. He cherishes the memory of the occasion when he met Netaji and spoke to him. Out of the 60,000 Indians there, majority had joined the INA. Mr. Chacko remembers about Netaji’s presence in Singapore when Britain surrendered to Japan on August 15, 1945. Chacko believes that he (Netaji) was killed in a plane crash on his way to Japan via Taiwan.

His fighting days were much before his marriage when he was a bachelor. After marriage, he led a peaceful life in SIngapore with his wife and children. Retiring from his job in 1970 he came back to settle down in Kerala. He is still keeps as treasures the INA uniforms and the badges bearing Netaji’s picture and other symbols. He had other connections related to the INA as well. In Kozhencherry and Thottapuzhassery there were a few retired INA soldiers. All of them except Mr. Chacko are no more.

Mr. Chacko is a hero to the new generation of the locality as an enthusiastic old veteran who had participated and witnessed the freedom struggle. He is a regular invitee to the independence Day/Republic Day celebrations held by schools and local organizations. He participates in such functions wholeheartedly and shares the memories of old times. ‘Even when I decline such invitations’, he says, ‘the youngsters would not let go’. They want to hear the history of the struggle. Behind the gentle demeanour, the man of 94 still exudes an aura of heroism.

According to Mr. Daniel, the Metropolitan favoured and accepted the faith of the Jacobite Church and as such he had no right to enter any of the Mar Thoma Churches and that he should not be allowed to continue as the Supreme Head of the Church. This case is known as the ‘Daniel Case’. This litigation lasted for almost 10 years and the final judgment from the Supreme Court of India came on 7 Jan 1965. In all the three courts (the District Court, Kerala High Court and the Supreme Court) verdicts were against Mr. Daniel.

This case was an unfortunate event in the history of the Mar Thoma Syrian Church and resulted in the formation of the St. Thomas Evangelical Church of India on 26 January 1961. Twenty priests who had been ordained in the Mar Thoma Church joined and pledged allegiance to the new Church.

Adv. K.T.Thomas appeared before all the three courts for the Mar Thoma Syrian Church without taking any remuneration. Total cost of the case was Rs. 13;239/- (today it could be in crores).

The Malayalam translation of the Daniel case from English. 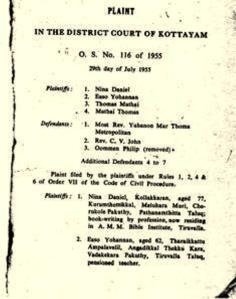 Excerpts of the Daniel case. 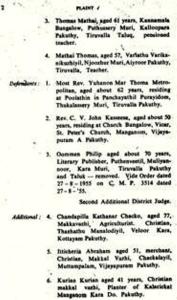 Excerpts of the Daniel case.

Excerpts of the Daniel case 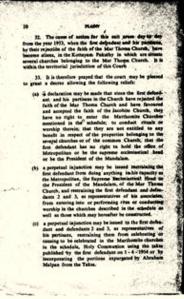 Excerpts of the Daniel case

27 September, 1947: Formation of Church of South India (CSI) in 1947, as a union of Anglican, Presbyterian, Congregationalist and Methodist churches. The idea of a Church union was proposed in 1919 at a conference held in Tranquebar (now Tarangambadi) in 1919. After 28 years of discussions various denominational churches in South India established by different Missionary societies agreed to the formation of the Church of South India in 1947 after India attained independence. The inaugural ceremony was held at St. George Cathedral Madras (Chennai).

The Church of South India (CSI), Church of North India (CNI), and Malankara Mar Thoma Syrian Church of India jointly formed the Communion of Churches in India (CCI) in 1978 for mutual recognition of the ministry and leaders, inter communal relationship, and to explore possibilities of working together and other areas of cooperation in the fulfillment of the mission of the Church in India.

At the inauguration of Church of South India. Photo by Mark Kauffman (LIFE magazine)

The presiding bishop of the inaugural function was the Rt. Revd. C. K. Jacob of the Anglican Diocese of Travancore and Cochin. A vast congregation gathered in the cathedral at Madras from all over the world. The following historical declaration was made by Bishop Jacob at the inaugural service.

“Dearly beloved brethren, in obedience to the Lord Jesus Christ the head of the church, who on the night of his passion prayed that his disciples might be one, and by authority of the governing bodies of the uniting churches whose resolutions have been read in your hearing and laid in your prayer before Almighty God; I do hereby declare that these three churches, namely – the Madras, Madura, Malabar, Jaffna, Kannada, Telugu, Travancore Church councils of the South India United Church; the Methodist Church of South India, Trichinopoly, Hyderabad and Mysore districts; the Madras, Travancore and Cochin, Tinnevelly and Dornakal dioceses of the Churches of India, Burma and Ceylon; are become one Church of South India, and these bishops, presbyters, deacons and probationers who have assented to the basis of union and accepted the constitution of the Church of South India, whose names are laid upon this holy table, are bishops, presbyters and deacons of this church. In the name of the Father, and the Son, and the Holy Spirit, Amen.” ~ wikipedia 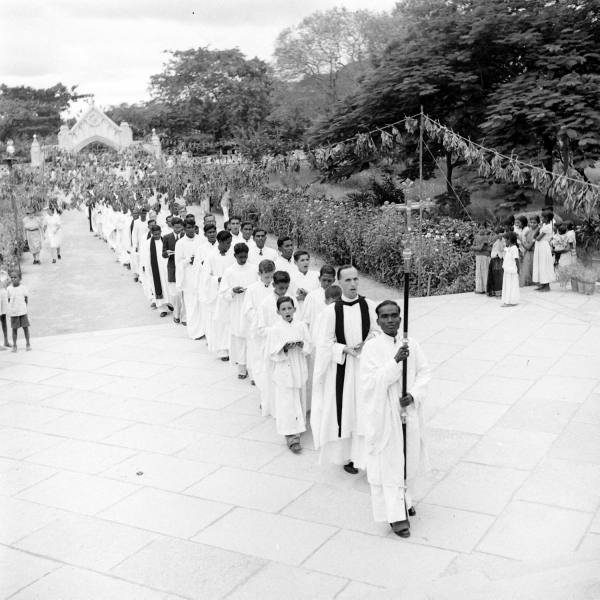 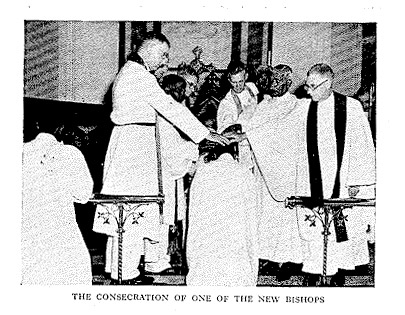 Clergymen from 5 Protestant faiths attending the inaguration of the Church of South India. Photo by Mark Kauffman (LIFE magazine)

29 November, 1970: Formation of Church of North India (CNI). The inaugural meeting of the CNI was held in the Unity Hall opposite the Anglican Cathedral in Nagpur. The metropolitan of the Mar Thoma Syrian Church Dr. Juhanon Mar Thoma attended this meeting.

It was a merger of six Christian denominations, including the United Church of Northern India; the Anglican Church of India, Pakistan, Burma (Myanmar) and Ceylon; the British and Australian Methodist churches; the Council of Baptist Churches in Northern India; the Church of the Brethren; and the Disciples of Christ.The motto of the church is: Unity – Witness – Service.