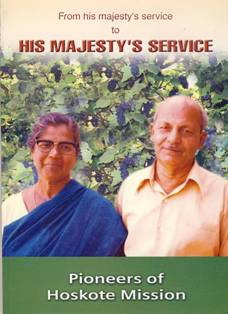 18 June 1986: Death of Mrs. Mariamma (Pennamma) Joseph (b.31 March 1917), Co-founder of the Hoskote Mission, Bangalore District, Karnataka, India. Mariamma was the daughter of Mammen Mammen and Mariamma of Manalukalayil, Kumbanad. She did her Teacher’s Training Course (TTC) from Peringara School near Tiruvalla, after which she taught in many schools including Arrangatu School, Pullad, Perumbara (Kuriannoor) School near Charal Mount; Kanjeettukara and Nedumprayar (Maramon).

She was trained by the CMS Missionary, Miss Kellaway (Australia) of Vanitha Mandiram, Tiruvalla. Pennamma was greatly influenced through her life and testimony of this missionary. She had an earnest desire to go for mission work in Karnataka but her parents did not allow it (according to the then prevalent customs/ norms, Syrian Christian parents were  not willing to send their unmarried daughters to unknown ‘foreign’ lands) until her marriage.

However, her marriage with Mr. M.T. Joseph, (Manon House, Maramon) was a definite fulfillment of God’s call at the Maramon Convention (1947).  who had a similar call and vision to Karnataka. In obedience to this heavenly call, she resigned her Government teacher’s job, that had a permanent income, to an uncertain and unknown future. This journey led to the humble beginnings of the Hoskote Mission. She was called home on 18 June 1986 and buried in the Mission Cemetery in Ghonakhanahally, 7 km away from the Hoskote mission field.

Mariamma has finished her race and now she is with the Lord. The harvest is plenty, but the workers are few. We need more and more persons like Mariamma to work for the Lord. Millions of villagers are there who have never heard about our Saviour even once in their lives. Who will go???