5 July, 1415: John Huss, Bohemian preacher and forerunner of Protestantism, is burned as a heretic in Constance, Germany. John Huss was a religious thinker and reformer. He initiated a religious movement based on the ideas of John Wycliffe.

His followers became known as Hussies. The Catholic Church did not condone such uprisings, and Huss was excommunicated in 1411, condemned by the Council of Constance. Hus was offered a chance to recant  and declined with the words “God is my witness that the things charged against me I never preached. In the same truth of the Gospel which I have written, taught, and preached, drawing upon the sayings and positions of the holy doctors, I am ready to die today.” He was then burned at the stake, and his ashes thrown into the Rhine River. 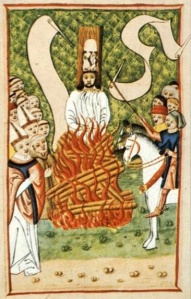 Ziegenbalg was born in a little Saxony town called Pulsnitz in southeast Germany. His parents were God fearing Christians with a missionary outlook.

With the help of King Frederick IV of Denmark, Ziegenbalg and his friend started their sea journey to India on 29 Nov 1705 and reached the coast of present Tamil Nadu, a place called Tranquebar on 9 July 1706.

They were the first protestant Missionaries to India and hence 9th July is celebrated as the birthday of Protestant Missions in India. Ziegenbalg passed away on 23 Feb 1719.