The Hamiltons (American Missionaries,) arrived in India in 1951 and were given only a brief period of language study before being plunged into the activities of the South India Bible Institute in Bangarapet, Kolar District, Karnataka. But they both continued to learn Kannada throughout their ministry in India, and found themselves quite at home with the language.

In 1952, Mrs. Mary Hamilton was requested to prepare materials for a model Vacation Bible School, and this was so well received that it has grown to become an annual event in many parts of India, and other countries in the world.

Now millions of children are attending VBS classes in different countries in different languages. Even though the Hamilton’s turned over the leadership of the VBS office into national hands, they continued to remain involved with it and gave their time and assistance until they left India in 1985.

Rev. and Mrs. Hamilton were teachers in the South India Biblical Seminary in Bangarapet, in Karnataka. They both were highly talented and have enriched the lives of many who came in contact with them. Their many and varied contributions to the ministries of South India Biblical Seminary and the Vacation Bible school movement will not be soon forgotten and we thank God for having brought them to serve in India. 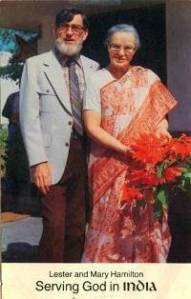